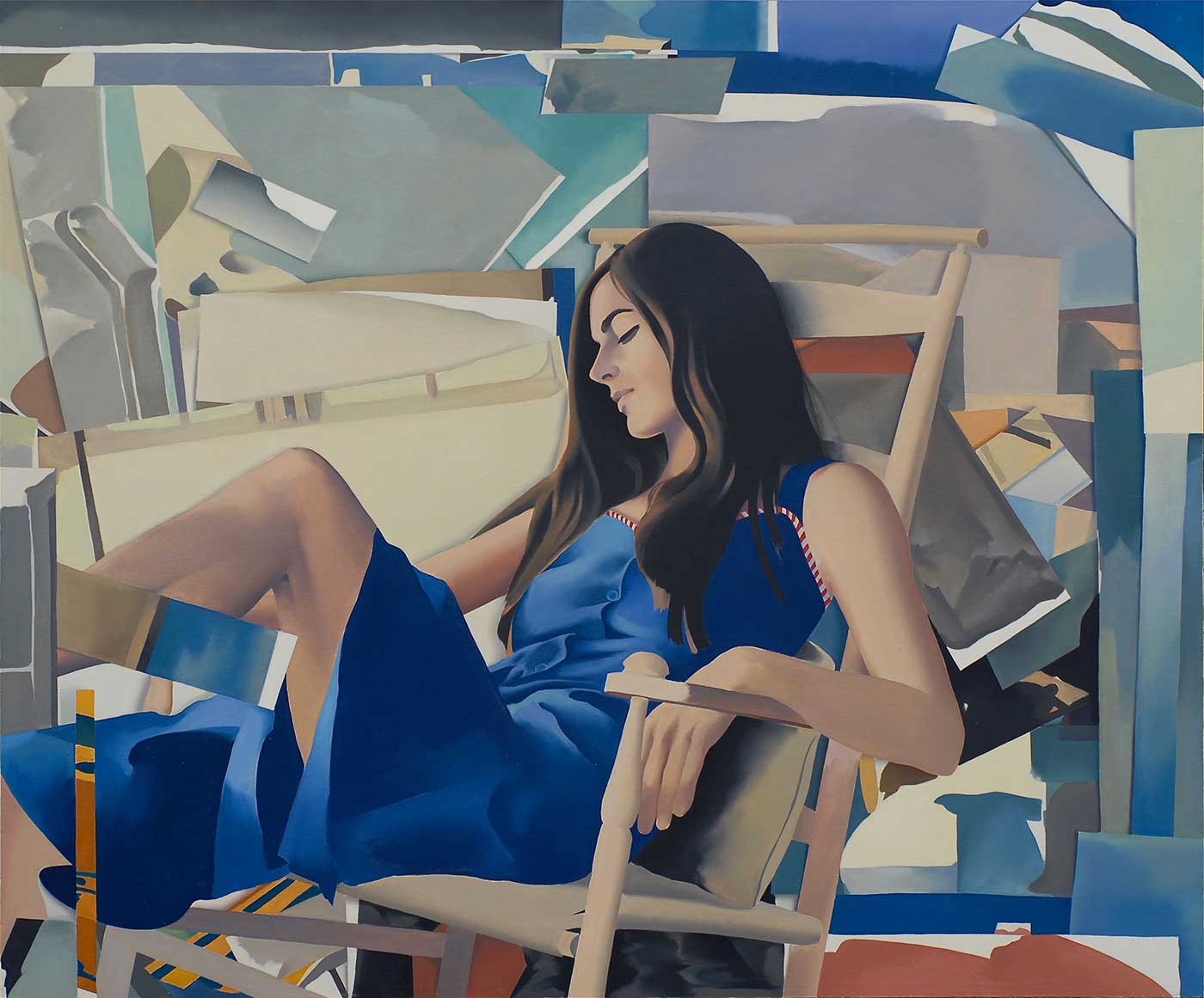 “Concerning his treatment of figure, and by no means limited to his series of authors, it is interesting that by consistently describing the figurative subject as being so utterly free from tension as he does, Shank wrests simple emotional resonance from them and projects them in effect, as he might any other object within a composition. Continually he thwarts these types of simple assumptions, crosses our sense of dimension by presenting artifacts which raise the question of surface, gives extensive screen time to landscape in what is ostensibly figurative, blends the abstract and the representational in ways that often defy easy distinction, treats the still life as landscape, and landscape as still life. His paintings seem to insist on being considered as objects in whole, rather than to be measured only by the emotive representational transparency of their craftsmanship. One finds that this work is very much about the visual surface, it is painting which is unashamedly about painting, rather than seeking only to measure itself by its fidelity to feeling or concept.”

“Shank’s most recent- and the artist’s most socially and psychologically charged works to date- include vignettes about ideas, intelligence, volition, the marginalized, and the political. Art history intersects with portraits of historical, un-sung heroes with anguish-fraught lives. All are silhouetted in reflective poise, or in a moment of deep thought. Interestingly only one figure directly confronts the viewer with her authoritative gaze; that of mid-20th century, feminist writer, Ingeborg Bachmann.”

“The works ‘Paul Nizan in Aden’ (2006), ‘Ingeborg Bachmann in Rome’ (2007), and ‘Robert Musil at Mahrisch-Weisskirchen’ (2008) share a deliberate awkwardness, in which Shank incorporates a lyrical use of color along with shifting form, slippage of information, and deletes logical sequencing in preference towards iconic image building. In an effort to portray the figure, not just the image of the figure, subjectively, he simultaneously renders historical signifiers to depict subject matter. The realism and fiction of these works belongs to the artist and reflect his most imaginative expressions.”

“The show ends impressively with three large paintings of figures from European literary history painted since 2006. All three of them, ‘Paul Nizan in Aden’, ‘Ingeborg Bachmann in Rome’, and ‘Robert Musil at Mahrisch-Weisskirchen’, exhibit a mastery of technique and a renewed attempt at integrating the unfragmented figure within a turbulent, chaotic ground. Maybe that’s the point: that these three figures, all of whom lived in exile during turbulent times, maintained their integrity while the world around them collapsed.”

“It’s in the figural works, however, that Shank really shines: In the midst of condensed, complex Cubist passages, Shank places solidly built, relatively realistic figures that become anchors for his frenetic exercises in abstraction. there are multiple variations on this approach, ranging from studio scenes such as ‘Figure in a Blue Dress’ (1981), to the dazzling pieces in which portraits of writers are set against abstracted European landscapes (‘Paul Nizan in Aden’, 2006; ‘Ingeborg Bachmann in Rome’, 2007; and ‘Robert Musil at Marisch Weisskirchen’ 2008). Particularly in the portrait of Musil, the writer maintains a stoicism that belies the nigh-apocalyptic scene of Cubist-expressionist collapse all around him. Only an artist of Shank’s accomplishments could integrate such disparate aesthetic strains and do it with this level of grace.”

“A consummate draftsman, Shank renders portraits of St. Louis studio models and Parisian passersby with the kind of unswerving line work and expressive precision of someone long-practiced in and expert at this fundamental craft. There’s something wistful about it all: Who sketches random faces in cafes anymore? Straightforward and intimate - and just shy of too much gloss - Shank’s pieces pull the viewer into a way of seeing that feels refreshingly outside the usual burdens, spectacles and rush.”

“In 22 Young Men the focus on the subject is sustained across compositions of great variety and within a broad range of lighting, used with wonderful effect to heighten the contrast between textures. Flesh– heightened against flat, planar collaged backgrounds– invites touch. Other works - such as the 2014 ‘Reclining Figure Under a Night Sky’– also explore an older trope of body as landscape, encouraged by ambiguities of scale and by the craggy topography of patterned textiles that suggest mountainous terrain. These elements of narrative and landscape unfold in scenarios that are unfastened from specific markers of time and place. Throughout, the studio becomes the site of reverie. Seemingly unlabored, these works launch memories of past voyages and other times brought to life in the present, gathering in the space between the real person and the studio fiction.”

“These are images drained of the turmoil of real life, transporting us to imagined islands of calm and beauty. They recall the places where the artist lived or to which he traveled in the past: North Africa, the South of France, New Mexico, and Death Valley: where the arid landscape and simple monumental forms - refracted and abstracted - counterpoint the liquid gaze and flesh and sentient presence of the models; where suggestions of age and time, or more complex psychological histories, are backdrops to the languid figures who dream and gaze clear-eyed and in seeming indifference to the chaotic world of memory and experience around them. For Paul Shank, as for other artists before him, painting traces the shadow of past desires, giving back to the artist, and to his subjects, an image purged of time and change.”